If you want a long term perspective, please recall that until 10 or so years ago, corn traded comfortably between $2 and $3 a bushel. That range held for 20 years, which could mean that the move over $3 is the aberration and that corn is historically expensive now. Rates of inflation for the last ten years have barely moved to positive territory, so even with a lot of cash sloshing around, it seemingly finds better homes than in the purchase of corn. Which is why corn has been in a bear market for the last seven years.

Maybe corn prices rise, maybe they fall in 2019, but its going to be pretty hard to get them to rise when your largest external buyer has about 2 zillion more bushels than had been expected, a number that has been called for  by a prominent agricultural analyst at a major firm for well over a year. Its also going to be hard to convince people around the globe that as they are losing their jobs in what seems to be a recession brewing for 2019, they should be buying more corn products. Consumption of everything traditionally drops in a recession. The exceptions to that rule historically were tobacco and alcohol, but recent trends seem to put those two products in the same sinking price ship as other commodities going forward.

But that's what makes a market. Remember its always a good idea to evaluate prices as a producer by thinking about what you would pay for the product if you were the buyer. Understanding the mind set of your counterpart in any market helps you understand the developing trends and whether those trends will eventually be your friend or your enemy.

How does this, "its going to be pretty hard to get them to rise when your largest external buyer has about 2 zillion more bushels than had been expected", fit in with this, below? -- Just asking

Below are the 15 countries that imported the highest dollar value worth of corn during 2017. 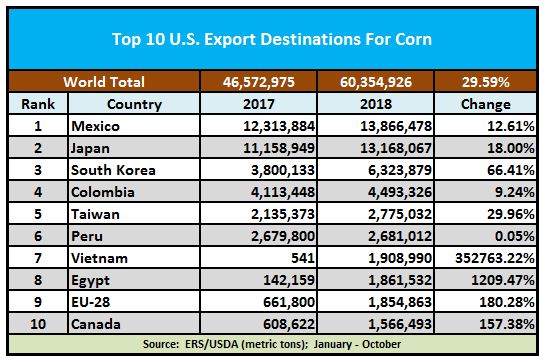 Thank you for your charts, they took time to find and copy to this forum, they are most informative, and your efforts are appreciated !

The point I was making is that the most recent information from November 2018 that we have on Chinese stocks of corn is that they are 150 metric tons larger than previously estimated. It doesn't matter whether you believe it or not, because its the only official information the market has to go on right now, and as such it is the information that the market will include in its determination of where prices should be, And there are private agricultural analysts and economists who also predicted the upward revision to Chinese corn stocks, so for now until proven otherwise, this is what the market will believe and trade off of regardless if its right or wrong.

Which means that 150 million metric tons of corn that the world market had previously expected to be bought in the future by China already has been purchased. That amounts to about 38% of the total US corn production in a single year that no longer will be needed going forward. Now granted the effect will be spread over many producing countries that sell corn to China, but the net effect on prices going forward is that there will be significantly less demand in the next year than was previously thought. With that kind of drop in demand, it will be very difficult to increase demand from other buyers to offset the reduction in demand from China for the next year or more, and as such, one more factor that affects corn prices - overall global demand for the next year - will exert a negative rather than positive effect.

Please excuse my use of hyperbole to make my point in my prior message. It was late at night and I was tired and I didn't feel like crossing my t's and dotting my i's. I wanted to make the point that the fundamental economic conditions are not conducive to a price rally in corn, even if I exaggerated the exact specifics of the matter. Regardless of the exaggeration, the point remains that when you cut that much demand out of the equation for the upcoming short term of a year or so, you're going to have a very hard time to get prices to go higher.

Corn has stayed within a pretty tight range of $3 to $4.50 for a while now, and that has been while the world economy has been firing on all cylinders. With the prospects of a global recession seeming to be increasing, along with a slew of other factors like increased corn acreage at the expense of soybean production, if that price range is to change during the next year it will be to the downside rather than the upside. If US unemployment were to move up to 5 or 6%, which is what policy makers at the Fed are trying to do with their rate increases, you will see a significant pullback in consumption of every thing imaginable. As a necessity, food will see less of a pullback, but with production levels where they are now and scheduled to rise in 2019, any drop in aggregate demand will exert a rather strong headwind against attempts to get corn over $4 and keep it there.

As I have written before, no one wants to see corn prices rise more than me because there is a lot more upside potential than downside from where we are now. The problem of course is you need the right fundamental economic conditions to foster the up-move, and right now I do not see those conditions as being present for the next year.

Vince...I have always used the nearby continuation chart that ends at expiration, not first of the month, and not most volume, contracts. I like it because it shows the actual commercial demand for the product going into expiration. This year in corn being very specific and telling. From OpExp on 11/26, to contract exp on 12/14, cz gained .04 on the march. This is not the normal action of a commodity with massive commercial inventories looking for a home. In those cases, like July and Sept of this year, the nearby gets hammered going off the board. I think this is an interesting point that needs to be considered.

Net effect is the gap is from the Dec option with the gap from 367 to 369. At the birth of bull markets, this can be a nice indicator. If the March can hold the 3.67 gap it is very telling, especially the longer it holds. Normally, the market waits and something good happens finally. Maybe a Jan report that reduces yield, or folks realizing the increase in corn acres just shifted in to CRP with the acreage ceiling go up 3 mil (what the trade thinks corn acres will go up).

Nothing is perfect, but I just learned it this way 40 years ago and have always stuck with the nearby expiration form.

Ray....pretty sure I know more history than most...certainly study history more than most...

and suspect that you don't have access to the databases that I have...

This is why I have felt beans would trade 760 at some point, and probably still will.

In terms of percentage of the range, corn is extremely well valued at 3.30. Anyone who

Nothing goes down forever. Another valuable lesson from history. 72 months down in

corn is a old in the tooth trend. It could get older of course, but it just becomes unlikely

at some point. This is why we study time not just price. Price is easy. Time is more

No one of knows the future, thankfully, thus it just becomes statistics and probability.

bankruptcy over time. (Kind of why there are only a few commercial farmers left, a generation

from now there will probably only be 20% of the current group around, especially if they are

burning carbon out of the soil) maybe not, gov policy can shift the world as you have

I agree with you, no market can go down forever, and you would think that when farmers are barely breaking even with corn in the $3's, there would be a great impetus for an upmove to more profitable levels. But until it happens, like if we can break above the old major high of $4.1225 on the continuous front month contract, we have to accept and work with what we have., And what we have tells us that there is a good chance that in a recession we very well may move into the $2's again. Maybe that will be the final sell-off, the one that makes the buy extreme, the one that flushes the speculators who have been holding the market up but also the farmers who are barely making ends meet who would do the price of corn a favor if they were sent into another product. A final exhaustive down trade that gets rid of the excesses in the corn market and reduces the supply going forward.

But until the supply side of the corn market either figures out some new ways to use their corn, or a good number of the suppliers are forced out of the corn market, I don't see what fundamental reason would push prices higher. You can opine that corn will do it by itself because the price already is too low, but if that was going to happen it would have happened already. Prices have been in the 3's long enough now that if that really was too cheap a price, buyers would have grabbed every ear (sounds more like the province of a French woman in bed than a corn processor) and driven the price higher. Since that hasn't happened and doesn't look like it will happen now either, then we must see some kind of fundamental change in the supply curve or prices will stay in their bear trend.

Ray who is the prominent agricultural analyst?

If you enjoy history study the stagnation of the 50’s and 60’s. 72 months is nothing. Mostly I like to look at 14 years from the new paradigm shift higher.
0 Kudos
Share
Reply

Is that the emotional gap down or the cyclical gap down.
0 Kudos
Share
Reply

Arlan Suderman, Chief Economist for IntlFCStone, is a prominent agricultural analyst who predicted that Chinese corn stocks were being undercountered by at least 100 million bushels (or metric tons, I can't remember which one now, but either way it was a huge amount) months before the crop report in November confirmed his calculations. I remember when the report came out I thought it was a typo, but then I remember reading Suderman's commentaries that there had been a drastic undercount.

A year and a half ago Suderman also predicted that the corn and soybean holdings of the Chinese were being undercounted by 20-30 million metric tons, and he was proven correct about that also.

He seems to have a model or some access to information that is more accurate sooner than the USDA calculations with regard to Chinese stocks of corn and soybeans.