It’s become well known that you owners/feeders etc are being faced with euthanizing mkt weight hogs.

Does anyone know what is being recommended or implemented?

Gasing inside a building as they routinely do with poultry wouldn’t work as the manpower to drag 600-2000 or whatever the number would be is unimaginable.

Picturing pushing out a door or dock and then not moving as they pile up and then shooting them and burying on-site. Which is illegal in some areas and would require waivers from Animal Health and Pollution Control Agencies (at least it would here in Minnesota).

Would take a bunch of guys with powerful guns (ever try to kill a big hog with a .22?) and ample ammo.

Hogs wouldn’t be on the checklist for the  Q’s and other defenders of freedom who have been buying and stocking up their arsenals. Might not want to waste a cartridge on a hog that had some Democrat or feminist’s name on it.

One thing for sure, it would take a lot of beer. And

A naive question from isolation central....... It was the workers who have the problem.  Why can't the animals be relocated ??   South or wherever they can be processed.

Contracts have been walked out on ??? or are they paying just not taking?

Some fast shuffling going on down here in the beef plant areas where they are trying to avoid the shut down answer.  Temporary housing on company property for quarantene while employed to keep product rolling......

Sterling Colorado. plant shut down and that is a mess..... it stops everything and eventually food supplies as well.

Wow, hadn't even really thought through that aspect.

Back in the day we would have found someplace for them- even if you were losing a lot of money on every head it would be better than 0.

With the tight production schedules in the modern system it is about impossible to think of anywhere to go with them* if there isn't enough kill capacity.

Probably a good reason why nobody's talking about it- pretty bad PR for "the industry."

A rendering industry leader that I interviewed touched on this topic, this week.

I haven`t heard of market weight hogs being euthanized (I`m not saying it currently isn`t or won`t happen).  But they`ve relaxed stocking pen size requirements to make room.  A guy that should know is saying that you can get all the weaners out of Canada that you want if you pay the trucking, seems to me those pigs should be euthanized (No Country For Old Men bolt gun)  and a Democrat/Marxist style mass grave for those pigs.  And put the market hogs in the barns on a 4lb sow ration until things get caught up.

Trying to picture feeding each hog 4# a day in a slatted building.

Culling market-ready hogs? Just think, if trump had paid attention and done his job back in January, nobody would even be asking that question today.

But, Oh No, "it will just disappear tomorrow, like a miracle".

Hmmm, you must think that Dr Fauci doesn`t know what he`s talking about?

Dr. Anthony Fauci, the director of the National Institute of Allergy and Infectious Diseases and President Donald Trump’s top adviser on matters related to the coronavirus, said in a January interview that the virus was “not a major threat” to the U.S.

“Bottom line. We don’t have to worry about this one, right?” Newsmax anchor Greg Kelly asked Fauci on January 21.

Obviously, you need to take it seriously, and do the kinds of things that the CDC and the Department of Homeland Security are doing, ” Fauci responded. “But, this not a major threat for the people of the United States, and this is not something that the citizens of the United States right now should be worried about.”

CDC Director Robert Redfield told Fox News’ Brian Kilmeade late last month that he agreed with Fauci’s assessment at the time, and said that nobody could have predicted the outbreak that would eventually occur in the U.S. (RELATED: Infectious Disease Expert Says Anti-Malaria Drug Marks ‘Beginning Of The End’ Of Pandemic)

“Obviously that became corrected as they saw in the first three, four weeks in January that human to human spread was not only occurring it’s actually, as I said, more infectious and I think that led to the situation that we’re in today. I think no one could have predicted how transmissible, how infectious this virus really is,” Redfield said.

In January, Dr Tony Fauci was on my show telling America not to worry about the Coronavirus—that it wasn’t a major threat to the people. January 21, 2020, 20 seconds: 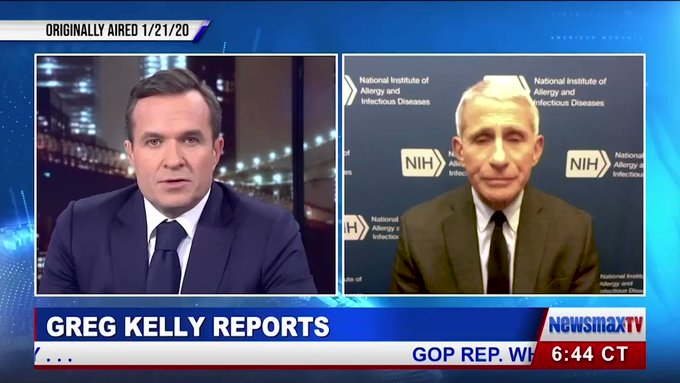 Fauci made similar comments in February, saying the threat to the U.S. from the coronavirus was “minuscule.” By early March, Fauci had changed his tune, saying the virus “could be really, really bad,” but still said he believed the situation could be mitigated. (RELATED: Could The Coronavirus Pandemic Lead To Violent Prisoners Being Released Across America?)

Rick....... where is your supporting evidence....... Show us the video that supports your nonsense.  you know the video where the President explain this mistake you refer to and the intentions and how it trumps the democratic opponent marching in the China parade in New york with knowledge she and her state of California will be protected from the upcoming pandemic strike.  ---- this is similar nonsense our former press, liberal educators, and democrats have been spreading for decades, beginning with polar bears on ice centerfolds.

I have tolerated the last of this hate filled tripe, from small minds.  It must be handed out to those who hold a degree in something at graduation.  A certificate of knowledge in a small area and mental blindness elsewhere.... followed by graduate hours in false statements and half truth.

anyway the questions raised are valid....... there is nothing wrong with the market hogs, why can't they be transported to locations that can process the meat?  Is it the contract issue?  Owned by Smithfield under contract prior to delivery.

If liberal folks can learn how to prepare food at home, why can't we learn to process meat at home.  Every orange clad bass pro shopper should know what their doing. With all the hunters who lobby congress and usda to have a say in CRP, all the freezer space for schwann man deliveries, I would think Minneapolis could process thousands of hogs in an afternoon.  Most of us who lived the pork production history of the last 50 years have seen the car come driving in and watched a small lady in sandles walk through the fresh snow to pick her market hog and gently slip a knife up through the hide and into the heart and drain blood into a pan while it still stands awaiting its fate.  As it falls two young men who came with her toss the 250 lbs of fresh meat into the trunk, pay cash, and go on their way.  Maybe not all of us have seen that maybe it is a side effect of living in a meat packing area.

I was reminded by authorities that it was illegal to sell butcher hogs and I was quick to point out that they bought a pet.   It seemed like a decent transaction and saved this lady and her crew night labor.

entertainment over ------ does usda have to do all the thinking on this one??  Well let me tell you "they are not".

My wife and I are rewatching some things we like on the tube to celebrate the destruction of the US economy by the very congress that fought to create it.

This week it is the HBO "John Adams"series we own on CD... so we can review what it took to create this country.  And to reassure ourselves that education does not come from entities with strong endowments.  How they were able to create so much with so little is a wonderful experience to sit through while we watch the present congress do so little with so much.

Even a fat hog can bacome a political pawn with the magic of media.

Move hogs south....kind of funny...kind of like "just move the crude oil somewhere else".

Hog plants run at about 95% capacity every day of the year and always have done so. Currently, about 25% of plant capacity is closed this week. You can do the math, no where to send them.

We have double-stocked the nursery and growing barns for a couple weeks now. That really isn't the problem for a couple more weeks. The real problem is going to be that alot of market ready hogs will grow out beyond optimal weights, and many will grow out to above where the normal plant can hang them on the rail, thus they will have to go to sow plants or small specialty packers. Bottom line is it is just an economic pandemic for the hog producer, packers will be fine as usual.