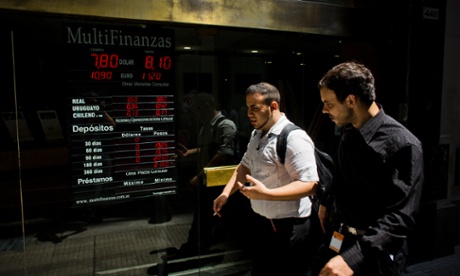 People walk by a sign showing the plunging rate between the Argentine peso and the US dollar in Buenos Aires. The currency has fallen just over 17 percent in the last two days against the dollar, and economic analysts expect inflation to hit 30 percent this year. Photograph: Victor R. Caivano/AP

The peso is suffering its fastest fall since Argentina's 2002 economic collapse as dwindling reserves keep the central bank from trying to prop up the currency by intervening in the foreign exchange market.

The 16 percent loss in the peso's official value against the dollar over Wednesday and Thursday could worsen the country's inflation, which is among the worst in Latin America, analysts said.

The peso fell from 6.88 per dollar on Tuesday to 7.14 on Wednesday. By Thursday's close, it was at 8 to the dollar. On the black market, where Argentina's currency is even weaker, the peso dropped 6 percent Thursday to 13 per dollar.

The sharp depreciation is likely due to a new government strategy of seeking a sudden devaluation instead of a gradual one, said Juan Pablo Ronderos of economic consulting firm abeceb.com.

"There was a first sign of this change on Tuesday because the central bank didn't show up (to intervene) until midday, and on Wednesday and today it just disappeared from the market," Ronderos said. "The gradual devaluation wasn't working because the central bank kept on sacrificing lots of its reserves and it kept on being reflected on consumer prices."

Analysts expect Argentina's inflation to reach more than 30 percent this year, the second highest rate in Latin America after Venezuela.

"The sharp drop will aggravate inflation, although the impact may be mitigated by the fact that some imports will already be purchased at the much weaker black market exchange rate," Neil Shearing, chief emerging market economist at Capital Economics in London, said in a research note.

"The bigger picture, though, is that the economic mismanagement of the past decade has once again pushed the country to the brink of a balance of payments crisis," Shearing wrote.

Critics of the left-leaning government of President Cristina Kirchner blame economic problems on its higher spending on social programs, expansion of business regulation and nationalisation of some companies.

s 2001-2002 financial crisis. So officials have been trying to keep dollars in the country for the central bank to use to pay off government debts.

But the bank's reserves have plunged to $29 billion, the lowest level in more than seven years despite increasingly restrictive currency controls meant to stem capital flight.

The controls make it nearly impossible to legally trade pesos for dollars, but many Argentines have turned to black market money changers to obtain dollars.

Many in the country are haunted by memories of the financial crisis, when banks froze deposits and the currency lost value, and they want dollars to keep in emergency stashes

Even in normal years, the summer heat in Buenos Aires is overwhelming. Among a population of nearly 13 million packed into the long shore of the wide River Plate, the phrase most often heard from the lips of porteños is: "It's the humidity that kills you."

For those who can't afford to escape to the exclusive summer resort of Punta del Este, across the river in Uruguay, or make the longer trip to the golden beaches of Brazil, there is only one solution: air conditioning. But a combination of global warming and an abrupt economic collapse scuppered even that consolation for shopper Graciela Fernández last week. When the temperature insisted on staying at around 40C and humidity levels rose to a drenching 90%, Fernández rushed to buy an air-conditioning unit she had seen on sale a week before.

"When I went to buy it, the price had gone up 25% since when I checked prices last week," she complained outside the Alto Palermo shopping mall. "The same thing just happened to me at the pharmacy where I went to buy the medicine my husband takes: the price was up 20%."

The economic panic leading to price mark-ups of this kind began in mid-January, when Argentina's central bank reserves dipped below $30bn, forcing the government of President Cristina Fernández de Kirchner to drop its policy of injecting large quantities of dollars into the exchange market to shore up the overvalued peso.

The sudden dollar scarcity on Argentina's exchange market sent the peso's official value crashing to eight pesos to the dollar, while the "blue" illegal rate shot up to nearly 13 pesos. Retailers immediately marked up their prices to reflect the new reality. In some cases, items were pulled en masse from the shelves, as retailers pondered how much to mark up their goods.

Re: Major problems with the Worlds third largest commodities exporter

OK they stole the pensions and savings of everybody in the last decade, put a what amounts to a 75% tax on exports of grain.

Send the army to empty the farmers grain bins? (It is about the only thing left that is a liquid asset)

Middle of summer and only part time water and electricity in the capital.

Buying grain from them would be like buying stolen merchandise wouldn't it?