Talk about the ruble. The dollar aint worth much either.

How do I come to that cnclusion? Well the bank won't pay me much to use my dollars. That tells me that a dollar is a **bleep** poor investment. 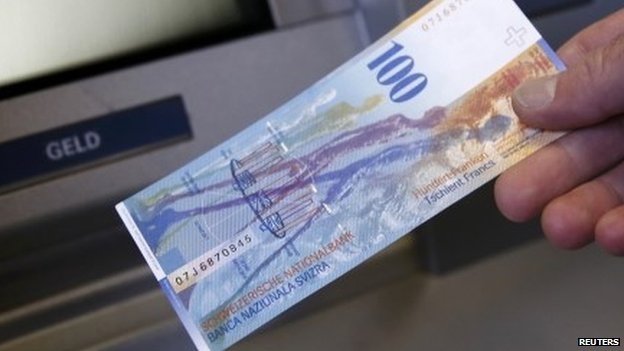 Switzerland's National Bank (SNB) will bring in a negative interest rate cutting the value of large sums of money left on deposit in the country.

It is trying to lower the value of the Swiss franc, which has risen recently.

Russia's market meltdown and a dramatic plunge in the oil price have led investors to seek "safe havens".

The announcement sent the franc lower, and in early trading the euro was buying 1.201 Swiss francs, fewer than the 1.203 it was worth before the news, just within the target.

The new rate will be introduced on 22 January and will only affect banks and large companies who use the "sight account" to transfer funds quickly and without restrictions.

A negative rate means depositors pay to lend the bank their money.

Geoffrey Yu, a currency strategist at UBS, said: "In the short term it gives them some breathing space.

"If you hold Swiss francs right now you do have to bear a cost. New buyers will be forced to think twice."

SNB said in a statement: "Over the past few days a number of factors have prompted increased demand for safe investments.

The central bank has a cap of one euro equals 1.20 Swiss francs, above which it tries to prevent the franc rising.

Too high a rate has the effect of making Swiss export products more pricey.

Switzerland is also chary of attracting yet more money into its banking-heavy small country.

Kind of coming to the party late aren't you? Feeling betrayed by your liberal friends yet?

Many of us have known that for some time.

I am exchanging some of my funny greenish pieces of paper for a new planter I am getting in about ten days.

Think I'll enjoy that more than a computer printout with a few numbers on it.

As long as this is all about oversimplification Hobby I'll tell you I feel betrayed by my 'conservative' friends in Congress who cannot be creative enough to clean up the aftermath of their Wall St buddies except to continually let them off the hook, coddle them, protect them and do nothing for the middle class, who got nothing out of the fiasco (except for welfare farmers),  after they greased the rails for the crash.

So I haven't seen any joy in the fantasy that 'conservatives' have about how the markets should work in a country who's middle class they are willing to sacrifice for ................ what, exactly? The numbers are in. And nothing being done in the 'people's' Congress except as lap dogs. And we already know the boogyman of inflation doesn't exist under these conditions as constantly yelled by Chicken Little, who used that as a reason for not assisting the economy. But the fat cats are still being petted. The ghost of Hoover is being seen regularly now in DC. The middle class isn't going to bail us out anymore. They've been taken advantage of but they aren't stupid.

Meanwhile Russia's stock market is now smaller than Google's valuation and money is being printed to save the fat cats over there too. THAT sounds familiar.

News flash.... I never said there were any conservatives in DC.

Since you brought up Hoover.... FDR did more to propagate the depression an  make it last longer, might still be going on if it were not for the German thing. FDR forced Japan to attack.

And now to the current crook in charge..No end in sight for two years of more corruption and blunders.

Hahaha! 'SHOCK!' So, where do 'conservatives' hide out these days?

No the 'German thing' doesn't cut it in terms of formulating a Roosevelt 'failure'. What WAS WWII in an economic sense? It was a gargantuan 'government program'! It would have been just as successful (more so) if all the armaments produced were buried in gigantic government funded holes in the ground w/o all the killing and destruction (the distruction just resulted in further government largesse to rebuild after). Yes, the huge leap in production through the use of corporations, training and hiring virtually every available human body was a government program success that revolutionized the American economy. The transition back to peace time was further based on government programs like the G.I. Bill, insuring a free education in the new economy that delayed entry  for G.I.s while the physical transition was completed, and insuring they would be ready for the new technologies and service portion of the economy. This all paved the way for a golden age in the US economy that provided jobs that were higher paying in real terms than now for the middle class. Even under a tax structure that was MUCH LESS favorable to the wealthy than now (there were a few loopholes even then).

So I chuckle when I hear Roosevelt was a failure in curing the Depression. His advisors wanted him to go MUCH further in stimulating the economy than he was willing to go. These are extreme cases but WWII provides an argument that Roosevelt was wrong about this and his advisors were right. By the way, Hitler proved the case also, though for a nefarious cause.