Since Currency trades,  That is the ultimate trade balance / imbalance Tool used.

We ran deficits w Japan for Decades. ( For Example )

Eventually the Japan surplus came down....

Everything Always eventually balances due to currency trading.

The rocks keep turning and the skelitons keep jumping out.......

If no one knew why "draining the swamp" was such a winning slogan.... the dem house is makeing it perfectly clear.

Keep investigating........ maybe we can clean house and the parasite career bureaucats also....... and humble a little.

Unending insubordinate insiders.  If the ride on the taxpayer backs stops for each interview we can stand 4-5 years of this. 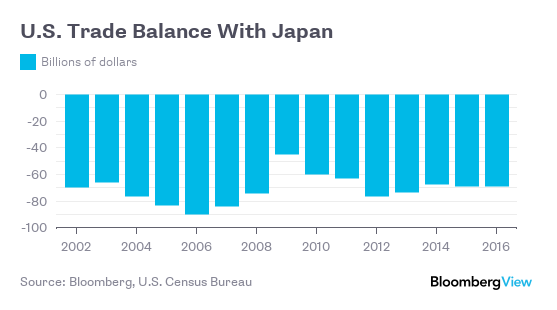 We hire the rest of the world to work and produce because we are to expensive for our budgets.......... eventually does not work.

I suppose it was in the 70s there was Datsun and Honda cars Yamaha motorcycles and pianos, Sony tvs and stuff and we thought Japan was taking over...but that`s nothing like we see with China now. Entire stores are full of nothing but Chinese junk.

And I know "Godwins Law" and "first one to mention hitler loses the debate" However the Chinese are worse than 1930s nazis as far as world domination.  Dealing with them, we are really digging our own grave, so I wouldn`t grovel too far on my hands and knees to make a deal for a extra nickel for my beans with them.

Japan isn`t our enemy, they don`t seek world domination, they just want to fly under the radar and survive "Little Boy and Fat Man" sort of permanently adjusted their attitude...perhaps that`s what China needs done to them and then they`ll be ready to play nice and talk.