Trying to draw the line for myself

No point in posting anything about ag policy at Forum because you'll just be attacked by a flock of angry flying keyboard warrior monkeys.

The stuff related to grain and livestock prices does, arguably, belong here. Even if it is policy related and politically sensitive.

As far as more general financial stuff, I'm going to use Farm Business as the dumping ground.

The 'rona is everything but I'm not sure where that belongs. But not a lot of point in not talking about the large herd of elephants in the room.

BTW, we did a pretty good job on the 'rona. We were pretty well on it way back in January* when the administration could have saved us most of this grief had they been. Unfortunately a guy who brought some good stuff to the table, early, missed the curve at Q-ville and burned. Which happens. In this very serious matter I have tried very hard not to disseminate any false information and have moved to correct it quickly when I may have not had something right.

We were also on the looming meat packing disaster early. Mostly ditto, see above. It might have been somewhat mitigated with early action.

I certainly transgress also but the Iran nuclear deal is probably Forum material. There are a couple of people who you could have a conversation with about that but beware of flocks of angry flying keyboard warrior monkeys.

*many people and their Trusted Sources got that very wrong, to tragic consequences. They don't like having their faces pushed into a meadow muffin.

I wholeheartedly agree about the "flock of angry flying keyboard warrior monkeys".

Some here in fly over country can not seem to understand how much damage our "Reality Star in Chief" has done to the rural economy, with trade wars,  not letting migrants in to harvest "food"crops, allowing ethanol waivers, etc...

Granted these have all been taking place for the last three and a half years and have started with small, subtle decisions- supposedly to make things "better" for all of us, but the only winners in this fiasco are far from "fly over country"

GO TRUMP! YES, really it's time for you to go.

I'm generally in favor of the free market.

Trade improvements would have been nice- I'm just on record going way back that this wasn't going to be the way to get there. And that was generally the opinion of the professionals in that area even though they had to carefully walk a political tightrope.

I've been a consistent critic of the construction and scope of the ethanol program- I'll continue to say that there was no more technical basis for 15 b/g/y than 9-11 and it would have been about the same in the end, or better. Not quite as big of a boom but also costs would not have gotten as out of hand either. And I have consistently said that once you get to 15, or near it, it is cruel and unusual to back away.

And the 'rona, which is severely testing the entire multi-decade neoliberal government agriculture effort.

I assume there will be ample emergency payments this year and adjustments to programs next. Life goes on for most.

I have laid out my belief that farm payments need to be primarily for the promotion of environmentally friendly practices- and that those be generous in nature in order to encourage broad participation. There's no particular public purpose in paying people to grow corn and soybeans- those and other commodity crops will be the default on most acres anyway.

What is a "free market" though?  China buys beans and pork from us, only as long as we buy billions of dollars more in products from them, as soon as we question it, they shut off commodity purchases and go directly to Brazil.

Then you take direct payments to US farmers, landlords hear about MFP payments and even Syngenta payments and hold steady on the rent.  Farms that are well heeled capitalize any extra payments into new land purchases and rents.

Grain prices go up and so do input prices.  About all that can be done is continue to throw out a few crumbs to keep the dwindling 800 acre midwest farmer going as long as he cares to put himself through it.   "they say" if we have a set-a-side and supply management that our competitors will only take advantage of it (on the race to the bottom). In other words, push on the balloon on one side and it just bulges out on the other side.

Not going to play BA two-step.

I could probably see the wisdom of some very strictly size limited income support as far as how you want higher prices but don't want big guys getting subsidies. What's the difference?

Farm policies always are made to fail- they address a former problem, then create new ones.

Ethanol is an excellent example. There was a boom until supply caught up, costs rose just as fast but didn't go down much. Although i saw few people make many strategic adjustment to that inevitability.

That's why I'd get away from that and move to green subsidies. I'll have to do some thinking about how you could construct that to not favor large operations- because everything favors large operations unless you specifically design it not to. And as we know, even then it is tricky to close all the right loopholes correctly.

"green payments" won`t alone make a small/medium operation profitable and large operations that buy seed and other inputs half price of everyone else won`t bother with the extra hoops.  Many of us just leave a little grass strip between to small hills to prevent machinery busting washouts, but not one BigShot, he was hooked to a 8 bottom moldboard plow filling in all his washouts...farm right through `em this year, every year

My "two-step" thoughts on farm programs is as much as we complain I don`t know what else can be done (politically acceptable) that what we already have.   I personally would like a return to a supply management program, since that isn`t something we farmers will do on our own, the government would have to administer it, but if most farmers continue to turn up their nose on the idea, it probably won`t happen.

So a "bullish" 3. - something billion bushel carryover is in our cards and the <$3 corn that will entail and funny thing with the hog and beef situation, there might not be the "cheap food policy" of the past either.

But 99% of Americans have no compelling interest served by paying people to grow or not grow corn and soybeans.

BTW, it might be better now that there's been a lot of tiling and and improvement done but a 10% setaside used to reduce production by 2-3%.

And you will be fighting the "real agriculture"- the oligopolies that run the milking line.

Several people have encouraged others to not spend a lot on marginal inputs. I don't recall any takers back in the day when I was observing that "the real agriculture" had built strong incentives for maximum yield into the new charter school farm system.

This is just my observation, I could be wrong, but I think most Americans have a positive view of farmers and I think after $8 hamburger, empty stores shelves, euthanizing hogs, dumping milk that public opinion of agriculture will improve even more.  There are many generations that have never went to the meat counter and saw it empty, I think this Covid19 situation has been a real eye opener for everyone.  Even if you thought farmers were jerks in the past, the last couple months you`ve realized that we are "essential jerks".

I think public opinion has shifted and any governmental assistance to agriculture will be strongly supported.  Yes, I`m sure "Big Ag Inc." will crouch behind the pitchfork holding, stoic Grant Wood version of farmers and get their share of the Uncle Sugar payments too.  But the coasts Long Island & LA approval of agriculture will be there, let`s not waste this new found status. 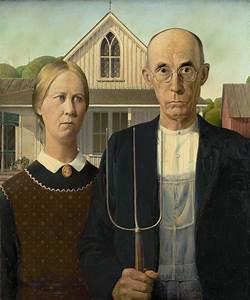