trip across wheat country and back this last 10 days .... began in snow and ended in wind........ Not much wheat left from Goodland, Ks to Elkhart ks.   A little irrigated with dedicated water.   Browner as we went south..... ksu probably won't come out west this year.... Hugoton area crop insurance office said dry land acres were already coming in for insurance claims.

If you get a chance take the time to contrast this video from 2 days after the derecho in Iowa with the second video of Market to Market today.  Notice the two descriptions of damage ....... Anyone who wonders about there actually being an ok surplus needs to watch this Market to Market show.

Just a little of this first one is required to realize how far from reality the discussion was.  When in fact the damage went right through their area...... They were concentrated on usda's projections and missing reality

I'll save the usda criticism and just say we as producers need to get our eye on the stuff they are asking us to ignore....

Our demand requires record trend production...... Demand growth is what we should be watching instead of listening to the market depression announcements.  What causes usda to get so far out of reality?   ............ ignoring the midwest.

I just wish we had laws against monopoly commerce...... notice that point in the market to market discussion.

This casino market left reality also and always will when we ignore production and think we can wish upon a "star" to have a surplus.  But what we have now is the usda "nuclear option"(expanded limits)-- for crashing a market..... lets see if it works again.

Seriously this is not a great market for the producer now.  But we will know soon how credible usda is...... increased trading limits might not work and the place you contract with for fall delivery may not be in business and you're contract may be owned by someone in Arkansas (and they will adjust your basis and change your delivery point while the feds look the other way). ---------or maybe there's nothing to worry about!  🙂

the M2M show gives video of wind damage in Iowa and represents what I saw there.  Except there was a lot more flat on the ground corn than standing corn.  The Stine commercial in the middle misleads to say that some stood and some didn't. (only on the fringe). or else not many planted his good variety.

We gotta stop depending on the beltway to tell us what is going on in our neighborhood...... learn to think a little and listen to the observers.

Ground pile award goes to Goodland ks with 3 1/2 still on the ground..... Too many feedlots and dairies between sw ks and Goodland to get a bunk of that.

Between Goodland ks and Ellsworth ks  every coop that had any was loading out milo into trucks heading out to a new future.  Actually I didn't stop and see if the other two were out of actual inventory.... but at these prices they better be.  Wakeeney, ks gets the "Clean out" award with two three trucks loaded and two waiting --- the spout ran continuous for while I got a tire patched.

Growing Wheat just didn't look great anywhere but Salina area  and they had some moisture yet to plant into. They are not messing around.

One of the sandwich delivery gals/grain buyers

said she had worked at a barge terminal on

The Mississippi river. If they had a 100 truck

day it was a big day.

At the e plant they need to average 175 trucks

a day 5 days a week just to stay in business.

I wish "they" would`ve been transparent and the grains would`ve been $1 higher last fall and brought about the rationing that will now surely be over done, hurting everyone in the long run.  Because corn stayed at $3 too long a year ago, we`ll probably have to go to $9, which not much money can be made using it at that price.  Dan Hueber on M to M said if corn gets too high the government will tell OPEC to produce more oil, killing ethanol demand.

but if corn goes to $9, she ain`t too piggy to go to town 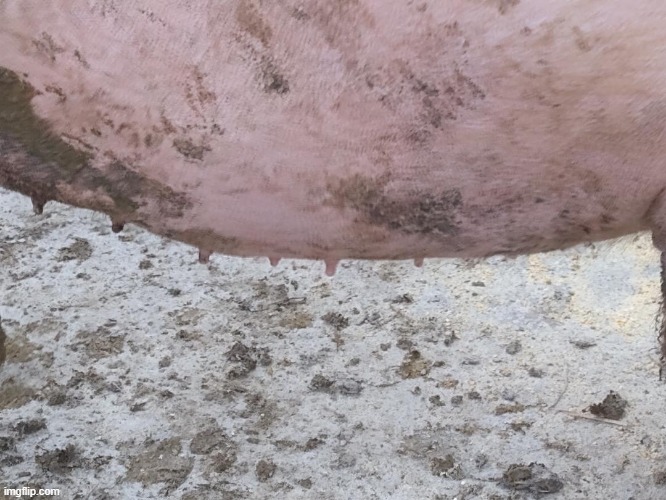 Corn bid at close of business Fri night was $7.05 at the eplant.

I was dumb enough yesterday to not only not sell some at that great price,  I pulled my previous offer that was just pennies above that.

Well hobby I envy your problem..... We are getting a bad start on a good year in the southern plains.... hot winds today, can't get new crop fields watered up and water wheat at the same time.... such extreme weather..... super dry after a few good light snows last winter spring rains missed totally in March and April.... and wind keeps coming.  some acres getting planted to water up ----but never a good start.

Brazil will redistribute the amazon water flow eventually........ they have a lot of growing production w acres and water.

I keep looking at the US and thinking we have an old cow ag economy on her 13 th calf.... and not a heifer for replacement for several years.  Were committed to producing into an And the voters keep fencing off more pasture for Realestate development and cloud storage.

Brazil is the land to exploit by Harvard and our midwestern University endowment funds leading the way destroying the Amazon Rain forest behind our backs.   There aint much left here to exploit.

Globalization is starting to possess an odor.  But then it always has as we exploit china's labor and cheap manufacturing and south America's waving the flag of racism and environment as a diversion.

Do you see some way we improve production within the US??  Hard telling what the real acre numbers are have been or will be.

Reading and watching the derecho films I did  a wiki search on the term derecho which stated the term was invented in Iowa a few years back when an Iowa professor noted the extreme straight line wind in 1877.  Wiki has a decent list of dates for derecho destruction winds since 1965..... I think Iowa was the 3rd or 4 th one last year.

SW thought it was us. until viewing M2M.

"Do you see some way we improve production within the US??"

If you mean increase production, not really if all grains are left at somewhat current ratios.

At least not in this country.

Do not see us getting over the 18 bb hump in corn and have to get to 16 BB first. As you stated too much prime ground gobbled up around metro areas every year.

Unless the weather patterns change soon for the wetter it could very well be under 10 bb this year. Would make your irrigated slice of heaven extremely profitable.

Got a "deal for you" in today's mail for only $399.00 I could get an inside seat at having a roach Infestation.

I've got approximately 35% of my corn from 20 to find a buyer for. Wonder how much his followers have left and what price point it went away for. Also how much '21 is gone?

Guarantee anybody if he'd seen this coming he would NOT still want/need my 399.

Crop insurance is capped at twice the spring price set if you had harvest price option. Just might be the year?

BTW been shut down today.

What I have left was heavy disked last fall, no deterioration of the stalks and ice cream bucket sized root balls due to dryness. Going to have to be disked with the light duty 496 disc then polished up with the field cultivator.

88° and a 35 mph breeze with humidity in the 20's not a recipe for having any moisture left to plant into if worked today.

You exercise that thinking as well as an older couple I mentioned in my thread a while ago.... Your a great marketer and an even greater manager of life these days.  Learning from our experiences is the key to success.