Stats show what appears to be a rapid collapse in US gas consumption creating much chatter in the blogosphere.

I was interrested enough to make a few calls around to people in various forms of business to see if they were seeing anything sudden of an alarming nature in business trends. To a man they all said no, business seems to be about as stats would suggest- stable, limping along, perhaps a bit positive.

I'm thinking there is something wrong with this dataset but I'm not familiar enough with it to know.  think it will be worth tracking going forward.

FWIW, China crude oil imports at a new record high last month and high enough that you can assume that they continue to build reserves. Like a lot of things in the commodity world, the key seems to be China stockpiling and it is pretty well nigh imossible to know what is going on for sure.

US stuff in the gulf probably doesn't deincentivize Chia's urge to build stockpiles.

I'm still of a mind that lower oil prices would be #1 on an Obama reelection agenda and #1 strategically for regime change in Iran. Perhaps the fly in the ointment is that China will just scoop up any spare capacity.

And here we thought the corn stocks reports were the only ones severely "messed up"!
0 Kudos
Share
Reply

Yep, traffic down at least 50% of non essential driving. Not much recreational driving-or cruising. I had expected to see an increase in thefts, but sheriff says not significant. Turning colder now, expect rise with a little warm weather.

Keep your guard up!

EIA data is generally quite accurate because they are working with a more stable set of data from fewer sources - there are alot less refiners in the US than individual farmers.  The EIA data is most analogous to the USDA surveying terminals, rather than acreages or farm storage.

Petroleum product consumption across the board has been decreasing the last few years, here is #2 distillates and jet fuel:

I work in the aviation industry, and the pressure on businesses in aviation and across the board to minimize their exposure to swings in variable costs is extremely high.  Combined with low interest rates, it makes a lot of sense to spend the money necessary to buy energy saving equipment and technology.  I think the market is working in a similar way with the average person who consumes gasoline.  As for the steep drop in October and November gas consumption, a lot of it could be due to people driving less to afford more holiday spending - remember, retail sales for many stores came in stronger than expected this last Christmas.

Doesn't make sense to me check out this chart from the US Energy Information Administration, it shows just the oposite:

There is a lot of "cherry picked" data in the original LIINK.  For instance they are showing auto sales declining by ignoring foreign companies.  The 11.5 million auto sales in the US figure, leaves out the 2.6 million sold by Honda, nissan, and hyundia-----all reporting increases.

Petroleum Distillates and Gasoline Usage in Barrels per Day 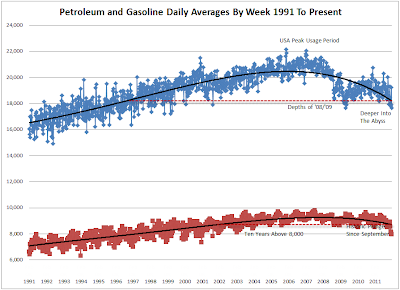 3 things contributing-------we are continuing to add higher mpg units and scraping older ones. ---- it is a very mild winter. ------- More americans every year are using mass transit for their principle form of transportation, especially for long distance trips.
"Gasoline Tanking"----------title is the first clue.
0 Kudos
Share
Reply

Just wait till the new CAFE standards get moving. Total fuel usage will be down significantly. Builds a case for a stronger RFS.