Does the usda sent personnel into the field to gather intel for their reports?????? Heard an interesting happening recently?????

No wind here but only a few miles to the north the wind started and went all the way up into Wisconsin from what I am hearing.  Have not heard any reports on crop damage but I fear there is a whole lot of corn this is flat this morning that wasn't yesterday.

I have no idea if USDA sends people into the fields to gather data.  I have been thinking lately that the USDA might very well resort to some exrtaordinary measures to try to get an accurate reading on this crop for September.  This in place of throwing a dart at a board.  Will be interesting.

Haven't heard much on Elnino of a while.  Last I heard it was dragging its feet.

Windy here, from time to time, but we always have periods of wind.

Watched a couple episodes of Turbine Cowboys, and am paralelling that with the new wind farm being built out West of me.

The two things I found 'interesting' about the wind farms, is that in July and August (when power is at the highest demand) the turbines average about 20% of capacity, or less, meaning we need to develop some sort of large scale storage, if we are going to use wind power in a widespread manner.

The second thing, is that for the wind farm near us, every single windmill is made overseas.  They are either Swiss-made, or Chinese-made.  As of the time they were planning this wind farm, the windmills that qualified for the biggest subsidy (making them cheapest to build per KWH) were the imported ones.

Makes one think just how f-ed up things really are....
0 Kudos
Share
Reply

Sorry the chart is so small, it was all I could find on short notice, but this is a chart of the 'average' monthly output of a wind turbine.  I guess I was wrong, June is the 'slowest' month, but note the dip in the summer months, when the usage is the highest. 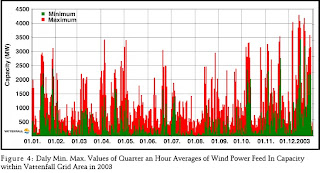 The chart above is from a Germany grid study and is found here.   It is 12 days of data with the red being the maximum 15 minute wind input to the grid and the green being the minimum for that 15 minute.  Look at the enormous fluctuations.  This is an enormous grid in Germany and represents THOUSANDS of turbines spread across the country.  Keep in mind, this is for the entire grid of mills, not just one turbine.  IMO, until we get some way to store the 'spikes' for use during the 'lags' wind power will at best be a supplement to other forms of generation.

As far as where they are made, a trucker showed me, on the gearbox of one of them, where it said 'China'.  He tells me, for the farms he has hauled them to, they are either Chinese, or Swiss, because the particular size of the mills that get the biggest subsidy, were not made in the USA (at least not at the time we spoke).
The mills go through town pretty regularly, and can only carry the BIG parts during daylight, and with a chase car with flashing lights, so they overnight from time to time.  One place you can see them doing this fairly often is the Bosselman Truck Plaza near Grand Island, NE, where they exit I-80, and turn North.  I've even seen them overnight in small towns like Burwell, NE.  The trucker there told me small towns were often the easiest to stop at, as they often have a place to park an oversized truck, not too far from a motel.  If you ever see one stop, chat with the driver.  The few I have seen, seem willing to chat, and almost appreciate the company of someone other than the chase car driver, or the 'Jeep' driver (from what I can tell, that is the steerable rig on the back of some of those very oversized trailers that helps them take corners better).

I've been flying around eastern Iowa quite a bit lately. There was a derecho in the last part of July that laid some corn down.  Some of the corn is down by field or block, which makes you thnk it is variety related.  Some is down in a pattern that makes you think the wind got funnelled around a hill or otherwise was stronger or weaker than normal.  There will be some challenges harvesting but most of it is OK so far.

Lots of windmill blades made in Little Rock AR. Don't know if the whole thing is though.
0 Kudos
Share
Reply

did anything special occur to cause you to think USDA will resort to "extraordinary measures" for Sep report.

The USDA going to extraordinay effort.

A. Making an appointment on friday afternoon.

B. Sending out a few extra surveys for farmers to answer on Aug 31.

D. Showing up for work in Washington with 1 inch of snow on the ground.

Not really.  Just the fact that a very large percentage of corn producing acres have gone through what could probably be considered a historical drought.  Couple that with the fact that USDA took a lot of heat about their numbers in March it just makes me wonder if they will take some unusual measures to try to get halfway close on their Sept. numbers?  I don't know.  Just kind of thinking out loud.  In reality they will probably just phone it in and ride this crop out and see where things shake out in Dec or Jan.  I'm pretty sure they will be just as happy as the rest of us when this year is over.  I'm not one of those conspiracy guys or one that thinks the USDA deliberately muffs their numbers.  I think in general they probably do the best they can with the numbers they have.